I thought this project would make a perfect fall-inspired Pinterest project for the Pinterest Challenge on Young House Love this week!

Check out these really cute velvet pumpkins with real pumpkin stems. Are they cute or what? I was inspired by similar pumpkins I saw at Terrain last weekend and decided that instead of blowing $40+ on one small one, I could probably make myself an entire velvet pumpkin patch for less than $20. 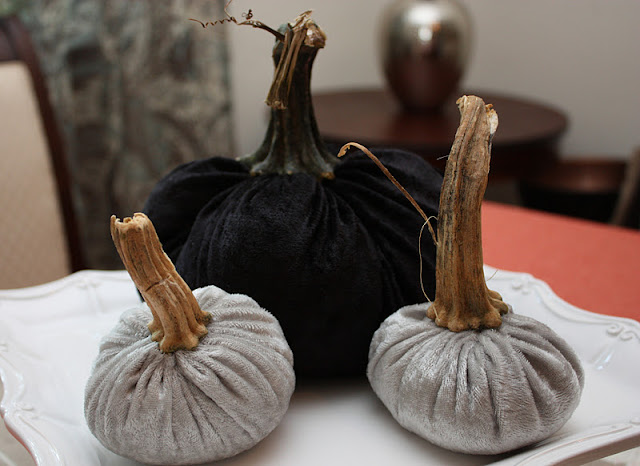 These are the ones that caught my eye at Terrain. They're beautiful. And expensive. They only sell the small one online. The large ones in the store were running about twice that price. 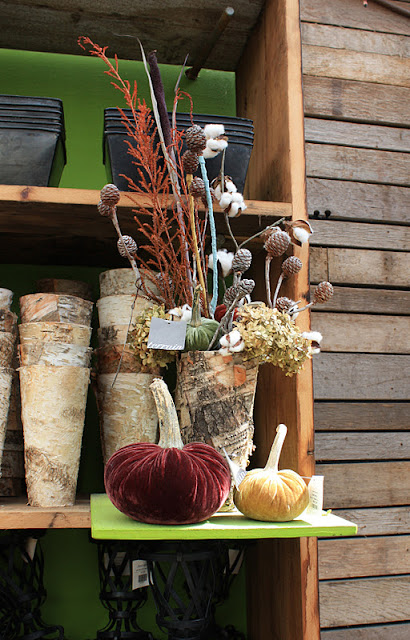 So, I did a little exploring online when I got home. Check out the gorgeous color combos I found on Pinterest!

I found this tutorial via a search on Pinterest.  This tutorial is very close to the steps I followed (although read it AFTER I made my pumpkins). My only changes, to either tutorial (because the cutting and sewing steps are the same), is that I filled my pumpkins about half full with rice (I wanted them to be very stable) and then added polyfill, and that I glued the pumpkin stem onto the pumpkin. I didn't stick it inside the opening in the top, like the first tutorial. Instead, I glued it straight onto the fabric as described in the second tutorial. I went to Joann's Fabric & Crafts at lunch one day. They didn't have silk velvet, like used to make the ones in the photos above. They did have TONS of colors in crushed velvet (which I'm not a fan of, but since I had no other option I just went with it). I chose a black and light grey because they'd go well with my Halloween decorations and I wanted to do something other than an orange pumpkin. Also, I knew I wanted to make some in non-traditional colors to use in my dining room, but I thought I'd give a black and grey one a try to see how they look out of the crushed velvet.


Getting the stems (if you want more than one) seems to be the most difficult part of this entire project. Look what happened to my Kate Spade purse when I went to the pumpkin patch!

If you can't find ones laying around your local garden or pumpkin patch, then you're going to have to buy pumpkins and murder them for their stems. Luckily I've been able to find very inexpensive victims at the local farmers market for only $1. I bought a few and removed the stems and left the pumpkins in the backyard for the squirrels. 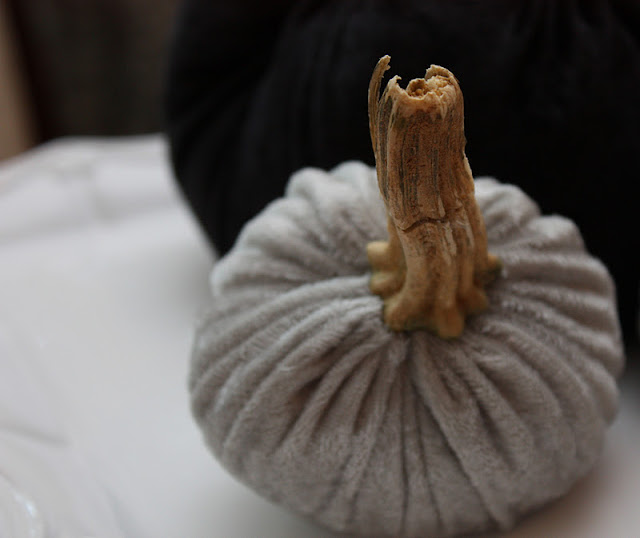 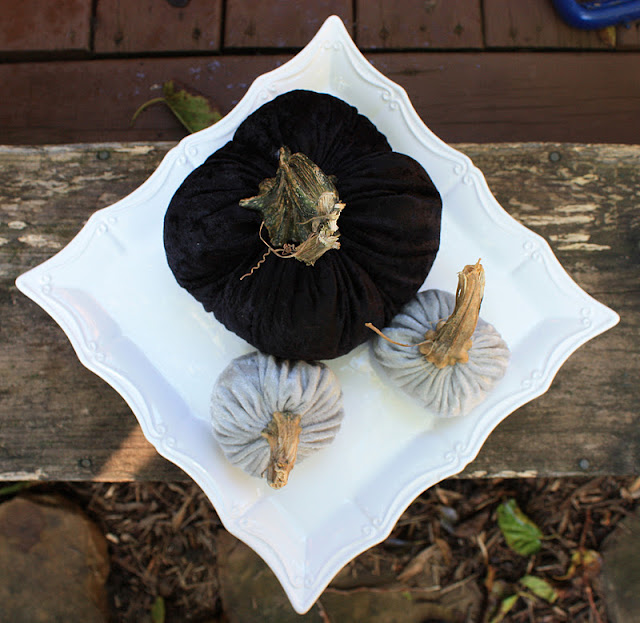 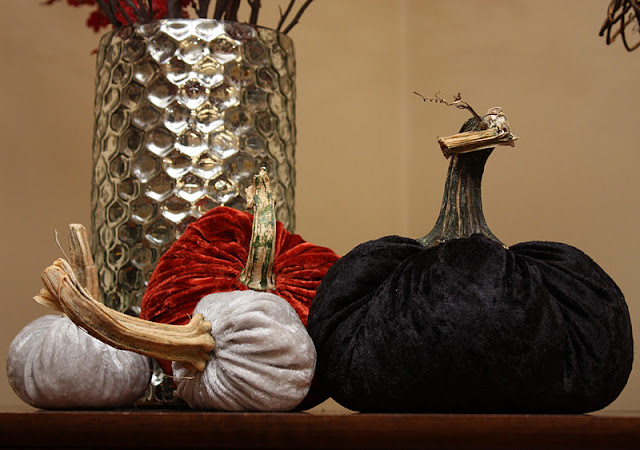 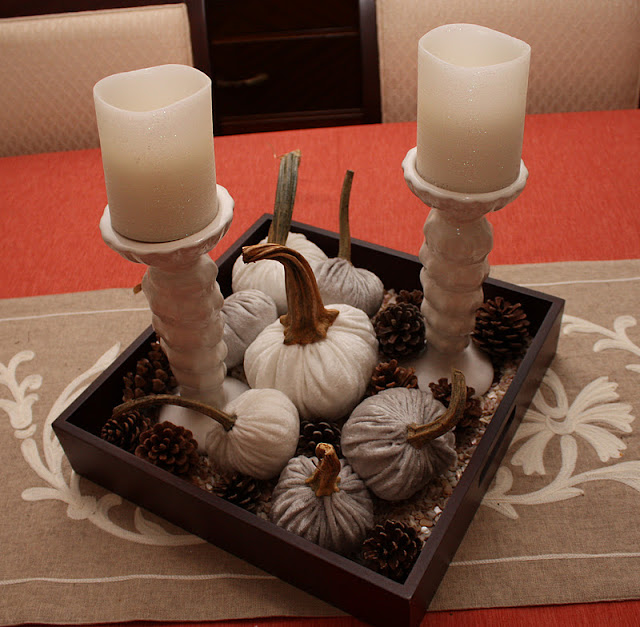 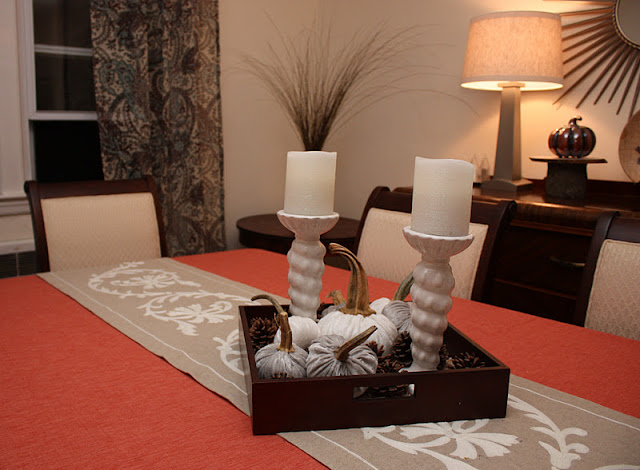 They look great! I love the color combos and I'm not crazy about velvet.

Thanks for my phallic one!

Thanks for featuring my tutorial at The Lemonista :-) Your pumpkins turned out cute. I love the stems in your purse. LOL...
Erin ~The Lemonista

Anytime, Erin! Thanks for posting a detailed tutorial so I didn't have to! :)

Every since I saw these adorable pumpkins I have wanted to make some. Thank you for the tutorial!!

Glad you found the tutorial helpful!

I love your purse full of stems. Too funny!

I never updated the post to add that I also found a bug in my purse later that week. Perhaps I should talk the designers at Kate Spade into creating a craft tote. :)

thanks so much for the instructions.
Love that black and gray for a fun and soft change.

I have tried to type the verification word 3 times now. I'm really starting to that those things.
are they a must???

How long until the stems rot though? And how will you get it out once it rots if it's glued on? They're beautiful!

But won't the stems rot? Then what do you do?

I actually just pulled my box of velvet pumpkins from last year out of the basement. They're all perfectly fine. No rotting so far. I use dried stems. If one rotted I could probably manage to pry it off, but I haven't had that issue yet. I just kept them in a cardboard box in our basement. Also, I don't really have any issues with dampness in my basement. It's cold down there in the winter months and there are vents down there for the AC when it's warm out.